Came across this very interesting article on Dragzine and wanted to share it with you.  It’s about piston ring selection for a boosted LSX engine for a ’68 supercharged Camaro.

“Ordinarily, we want good ring seal on the intake stroke because we’re relying on ring seal to create a strong vacuum for adequate cylinder fill,” explains Jones. “In a boosted application, we’re relying less on vacuum to fill the cylinders and can sacrifice intake stroke ring seal for designs that will increase ring seal on the combustion stroke.”  We want a ring design that provides the most ring seal on the combustion stroke, even if that means sacrificing ring performance at other times — such as low rpm and during the intake stroke. Boosted engines, unlike naturally-aspirated and nitrous-fed engines, achieve cylinder fill with the positive pressure created by a turbo or supercharger.

We chose a traditional supercharged-style Dykes ring for our setup. Dykes rings aim to accomplish the same goal as gas ported pistons, which is, get gas behind the ring to promote sealing.  They accomplish this task differently by increasing the gap between the piston ring land and the top face of the ring. The ring is then shaped into an “L” at the front facing edge.  The “L” comes into play during the power stroke. As the air and fuel mixture ignites, the gasses attempt to escape the cylinder and are forced downward against the top ring. As this happens, the gasses push against the outer “L”, pinning the ring against the lower portion of the ring land and the cylinder wall. The result is a ring that provides very low tension during the intake and exhaust strokes but creates a ring seal that is proportionally increased as cylinder pressure rises.

Also Coatings are discussed:  Diamond finish rings maintain axial tolerances of +/- .000050-inch and provide improved sealing between the piston and piston ring. The diamond finish ring is on the left and an uncoated ring is on the right.  “What we get into now is called Chrome Nitride and Titanium Nitride. These are coatings that are applied in a vacuum using a process called particle vapor deposition and it literally sticks to the ring at a molecular level. They’re not coming off, they’re not going to chip and they’re not going to flake.”

Our C33 stainless steel top ring in a .017-inch Dykes configuration. Total Seal takes a standard 1/16-inch ring (.0625-inch thick) and then machines a .017-inch step from the inside of it to form a sideways “L” shape. They also reduce the radial thickness to .175-inch (pic).  The C33 coating is a Chrome Nitride (CrN) coated ring that acts much like a chrome faced ring but without the adhesion problems and difficulty in seating that most commonly accompanies the older hard chrome process.

Our final ring package consisted of Total Seal’s C33 stainless steel top ring in a .017-inch Dykes configuration.  The second ring was a ductile iron Napier-style .043-inch with a .140-inch radial thickness. Both Jones and Pettis explained that ductile iron is a bit tougher than a regular cast iron ring. This in turn makes the ring hold up better to heat and pressure.  Jones further explained, “A taper face is a scraper ring profile that is used on the second ring.  The Napier combines that taper face with a small notch in the lower leading edge that aids in returning oil down the bore for improved oil control.”  Oil ring is a 22 pound, 3/16-inch conventional oil ring. 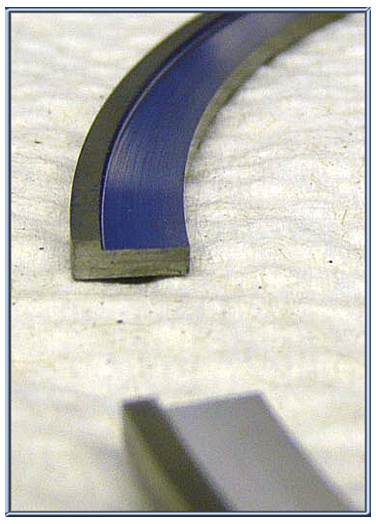