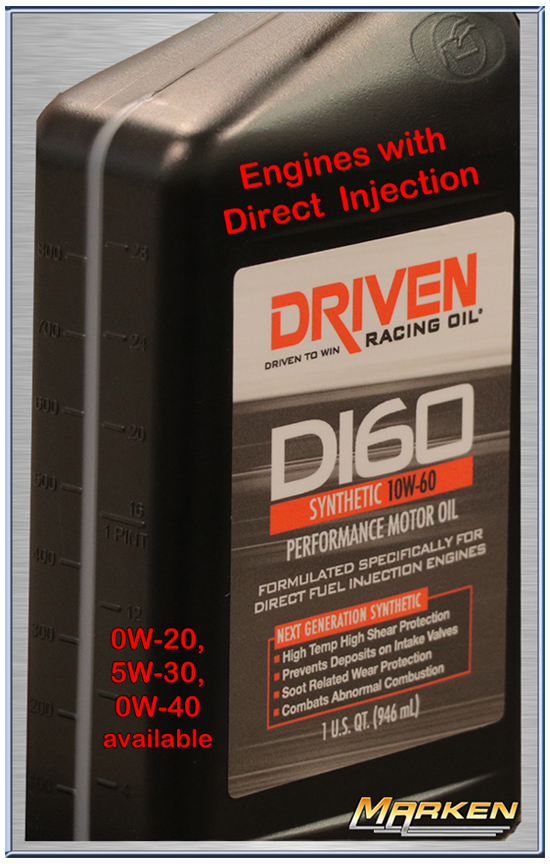 Driven Racing has kept up with changes in engine technology by supplying oil for Direct Injection via Marken Performance.  DI engines are typically higher compression and there’s less time in terms of crankshaft degrees of rotation between the time the fuel is introduced, to the time the spark event occurs, for the fuel to vaporize; you can’t burn liquid fuel-it’s gotta be vaporized. So what happens in a DI engine, is that you get more fuel dilution of the oil on the cylinder wall.  After a while, the fuel and the oil mix together, which creates this third thing, that’s neither fuel or the oil which is a lower octane value that causes detonation/knock which can contribute to destroying the engine.”   DI engines don’t have fuel to wash the intake valve clean, so they’re prone to having heavy build up and deposits on the back of the valve.”  Driven Racing new oils are designed to reduce the frequency and possibility of low speed pre-ignition, the second thing is also from incomplete combustion is that DI engines create soot just like diesels would.  Normal oils, racing oils especially are not designed to handle soot, because soot doesn’t happen in normal carburetor engines or port injected engines.  Driven Racing engine oils are designed to handle soot to keep them from causing excess wear in the engine.